Part of the Greek government’s response to the unprecedented number of refugees currently arriving in the country has been the implementation of five ‘hotspots’ on the islands closest to Turkey. On Chios, this hotspot is called Vial.

The aim of the ‘hotspot’ approach was to provide centres to register and process incoming refugees, who would subsequently be transferred to the mainland.

Since the EU-Turkey deal of March 20th, this process of transferral has been stopped, and Vial has become home to a static population, and a registration centre has effectively become a detention centre.

The hotspot on Chios is managed by First Reception Service, an ‘independent agency under the Deputy Ministry for the Interior’, in co-operation with the Hellenic Army.

Though temporary accommodation was always a part of the contracted agreement between the Chios municipality and the Greek government, Vial was not set up to be home to a large static population, and living standards within the facility have deteriorated significantly since March 20th.

Our main objective on this website is to provide a resource for the media, and to document notable cases of sub-standard, dangerous and possibly illegal standards of living in the centre.

This resource will be updated as we receive new material and documentary evidence.

As you review the evidence we have collected here, it is important to remember that the majority of the refugees involved in the videos, photographs and testimonials here have been detained inside Vial for over 30 days.

While not a majority, a significant proportion of the refugees documented here sleep on a hard concrete floor, with limited bedding or blankets.

The cases we have currently documented are categorised under Sanitation, Nutrition, Inadequate Medical Care and Clothing.

All photos, unless specified, are free to use, and credited to insidevial.wordpress.com. 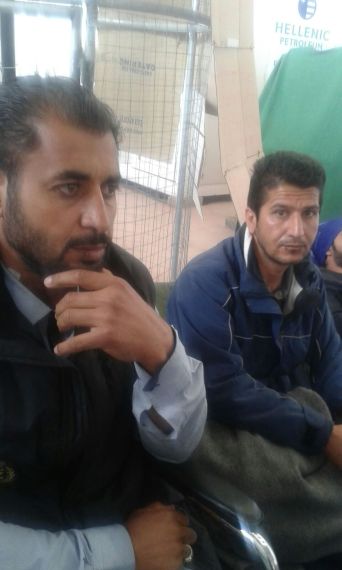 This is Farhem Al Ghanmi. He is 38 years old from Iraq. He is wheelchair bound as he injured his spine in a war. He has travelled alone knocking on the doors of Europe seeking international protection.

Farhem is currently on his third day of a hunger strike together with two others from Iraq and Iran. They have also sewn their lips shut. Another person named Hussein, just 21 years old, a Palestinian from Syria has joined the hunger strike today.

We spoke to Farhem on Day 2 (video by Sarah Gueguen) and via phone with Gabrielle Tan on Day 3 of his hunger strike.

He is exhausted but determined for the world to hear them. In the video below, he talks about the lack of facilities for the disabled in Vial, which creates particular hardships for his condition.

Not only is he facing the challenge of subpar humanitarian facilities, he speaks of receiving no support from groups / NGOS nor the authorities, even though he is a clear vulnerable case.

In the video, he alleges that the police told him earlier in the day “you’ll go back to Turkey.”

He has expressed his intent to seek asylum but the system is overwhelmed. He has been in Vial for 45 days and counting.

As of today, the First Reception Service (FRS) is on strike with no site management in Vial.

Food for the refugees in the Vial centre is provided by a private company contracted by the Hellenic Army, and is not the responsibility of the FRS. The Chios municipality has confirmed that the food provided is pre-packaged, and frozen for 7 days before service.

We have collected multiple testimonials confirming that the food provided is of poor quality, and nutritionally insufficient.

We have collected testimonials and photographic evidence to support the allegation that babies are being provided with an insufficient amount of formula milk. These include the babies of mothers who were unable to give milk due to malnutrition, and single fathers. These claims were taken up by the Guardian, the  Huffington Post and the New York Times.

From the video and testimonial evidence we have seen, the food served is primarily potatoes with a small amount of tomato sauce, and bread.

We have collected video evidence of a maggot inside a portion of food provided to a refugee in Vial.

We have collected photographic evidence of a protest by the refugees against the quality of food being provided to them.

Babies are being given approximately 1/5 of the nutrition they require. There is no hot water in which to dissolve the milk powder, so it is indigestible for many babies. Parents describe feeding babies under 6 months old bread mixed with water.

Video: A girl complains of ‘insects’ in the food.

Video: a maggot moving on the edge of a foil tin of potatoes provided to refugees.

Video: a maggot wriggles across the palm of a refugee, out of a portion of potatoes.

Photo: refugees in Vial lay their food on the ground in protest.

Video: a man discusses the problem of infant nutrition in the centre.

We have collected testimonials which allege that pregnant women are receiving insufficient pre-natal care, if any.

There is also a severely disabled boy who had no access to psychological support, medical care, or clean clothes.

You will also hear from the father of 2-year-old child with Down’s Syndrome describing how a medical note recommending the child for immediate transferral to Athens was confiscated in mid-April by personnel inside the camp. The child is allegedly awaiting a heart operation.

Finally, we have collected testimonial from volunteer medical staff on the island that a baby possibly suffering from bronchitis has not received treatment since arriving on the island on April 19th.

Videos: through a translator, a father discusses his son’s heart problem, and the loss of the medical papers recommending transferral to Athens.

Videos: the father of a severely disable boy discusses his condition, and the lack of access to psychological or physical support.

We have collected testimonials describing refugees being forced by smugglers to dispose of their possessions before boarding a boat to Chios. It is important to remember that often, refugees arrive on the island with only a small backpack, or no possessions at all.

Video: a refugee discusses how others have been making clothes from blankets.

Photo: a refugee child has cut away the front of their shoes, in order to fit.

Photo: a refugee wears a dress made from a blanket.

Photo: a refugee wears a shawl made from a blanket.

Photo: a young refugee wears trousers made from blankets. 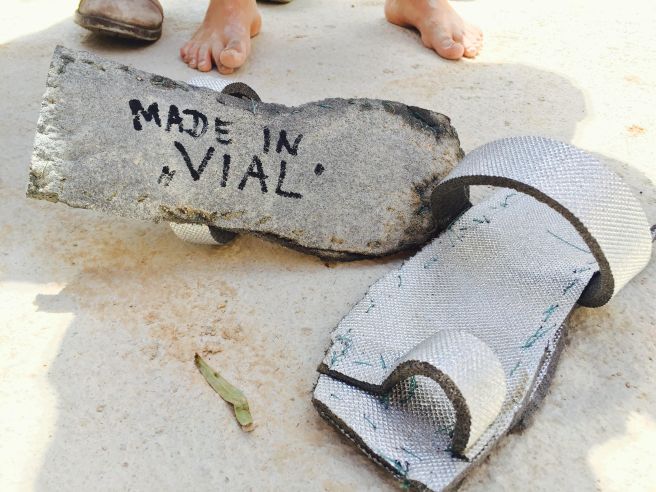 We have collected testimonials, photographic and video evidence of plainly unsanitary conditions in the outside areas of the centre, including what appears to be untreated sewage.

We have collected testimonial and video evidence that access to running water is limited, allegedly to around six hours per day.

We have collected video evidence of plainly unsanitary conditions in the toilet and shower blocks, including broken shower heads, toilets not functioning, and human faeces on the floor.

Human Rights Watch confirmed that Vial has “no showers that are accessible for people in wheelchairs, with one ONE accessible toilet for people who physical disabilities in EACH section of the camp.”

We have collected testimonial evidence from a wheelchair-bound woman who could not access the toilets.

Video: a refugee describes being unable to wash properly for a month.

Video: broken taps in the washrooms at Vial.

Photo: pools of unsanitary water in the outside areas at Vial.

Photo: discarded clothes in a pool of unsanitary water.

Video: a refugee discusses the health danger of open sewage. 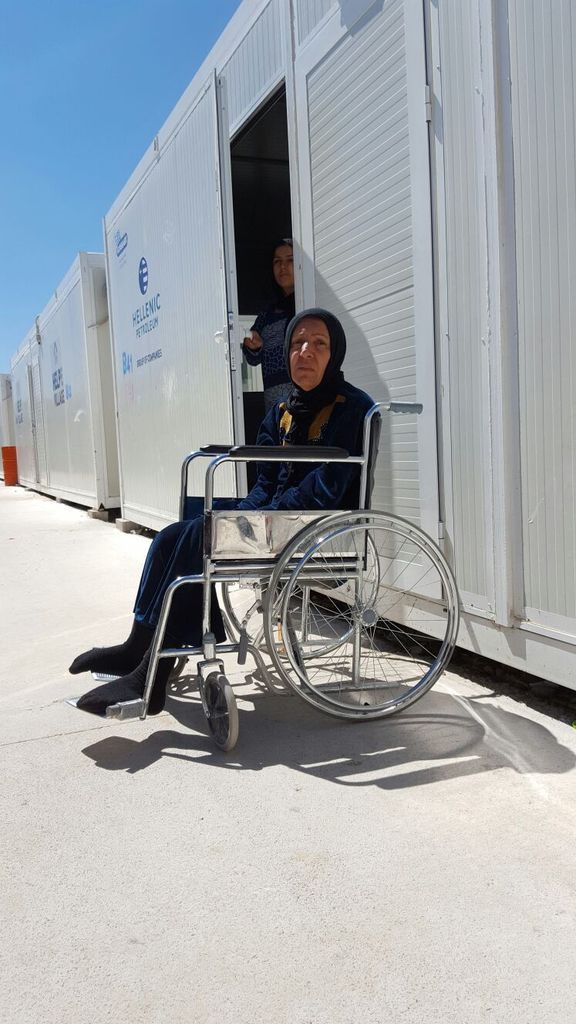 Photo: a wheelchair-bound woman in Vial.

Photo: refugees sit in the large main hall of Vial.